Here is a video of the Angels Mark loaned me spawing, or at least trying to. I dont think the female has any eggs.

Hopefully this is just a trial run for the real thing in a few weeks.

lol are those right or acute angles you're breeding there david? lol

lol just had to razz ya. email me when you get a chance. 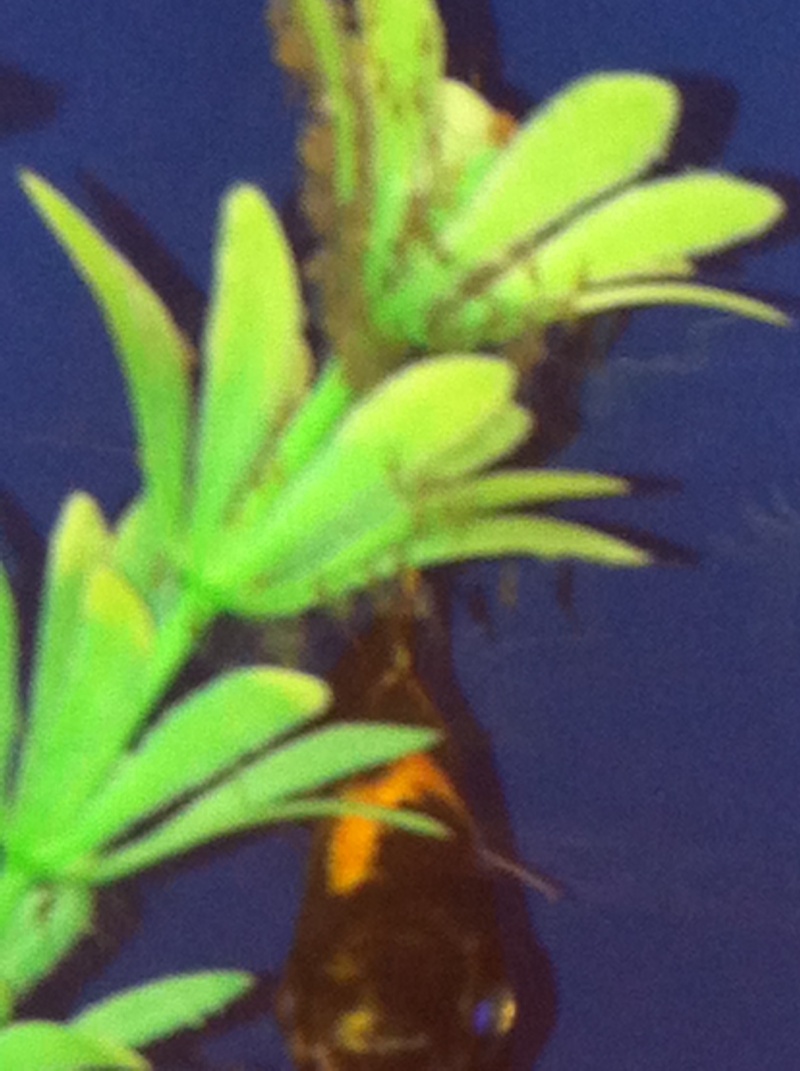 This is a large out of focus picture of the angel babies. The parents have moved them from one plant to another, but so far so good.

Here is another video of the angels moving the spawn for the 3rd time. They originally spawned on the slate, then moved then to a plastic plant (the one in the foreground left) then moved them to the plant that they are moving them back to the slate from in this video.

I guess it gives them something to do.

now your havin fun. keep us posted on them

I checked on them this morning and they moved them back to the plant they originally moved them to to begin with.

When do i get concerned about feeding the babies?

you wont want to feed them anything until 24 hours after they all are freeswimming. usually they get up and swim on day 7. for the first 24 hours they will still be feeding on their egg sack, which turns into their stomach. I recommend the micro worms over bbs after using them myself. much cleaner.

I have them with their parents in a 40-breeder. Once they are free swimming should I take them out and put them into something smaller? Would be hard to get them microworms in that size tank.

i use a 20 tall for my pairs. I would let them go for a cpl weeks in the 20, then move them to a bigger space. the 40 might be tough to get them fed it, especially if there is any current. is the 40 on your big system?

After that the room is about full. Still have 75% of the basement left though.

Todays the day for spawns

I had four angels going thru the motions of spawning but I never saw a single egg come out...they are all in the same tank...taking turns on the slate..lol. At least I can tell the males from the females now. I really need to thin them out.

they probably did it while you weren't home, and then were gobbled up right away because of the other fish in the tank. they are like that

Here is a short video of the babies free swimming.

Going to pull the babies tonight. Easier to get food to them in a smaller tank.

has mark bred those 2 before? if so im curious what he got in the spawn. I see a variety there. good luck with them.

how are these doing?

Babies are about 1/4" head to tail. Not quite Angelfish looking yet, but getting close. I still have them with the parents and there has to be over 100 of them. Eating well.

Going to remove the parents at some point and put the babies in a 10.

The spawn is kind of a mixed bag of the two pairs that Mark loaned me. The 2nd set laid eggs, but really were not caring for them and they were fungusing (is that a word?) quite a bit. So I took a small tube and took the wigglers off the slate and gave them to the other pair who had this spawn at the same time so the babies were the same age. They took the babies as I blew them out of the tube and put them with theirs.  Probably had to be 20-30 of them.

Be interesting to see what comes out of it. I'll post a picture tonight.

The 6 I got from you are doing well also, hope to get them to pair off at some point. They eat like pigs!  :-)

Mark - Do you wnat these Angels back sometime?

Here is a picture of the babies: