Got two breeder set ups going, going to introduce females to males on Sunday. Game on!

I have one pair now with a second pair that should be here next week.

Introduced one pair last night but the male was to busy trying to fight the goldfish next door so I had to cover that side of the tank and now he is just lazing about. I introduced another pair this morning. The male had built a large nest overnight and the female quickly swam under it like ,"Hey let's go already", but he's too busy flaring and prancing around. 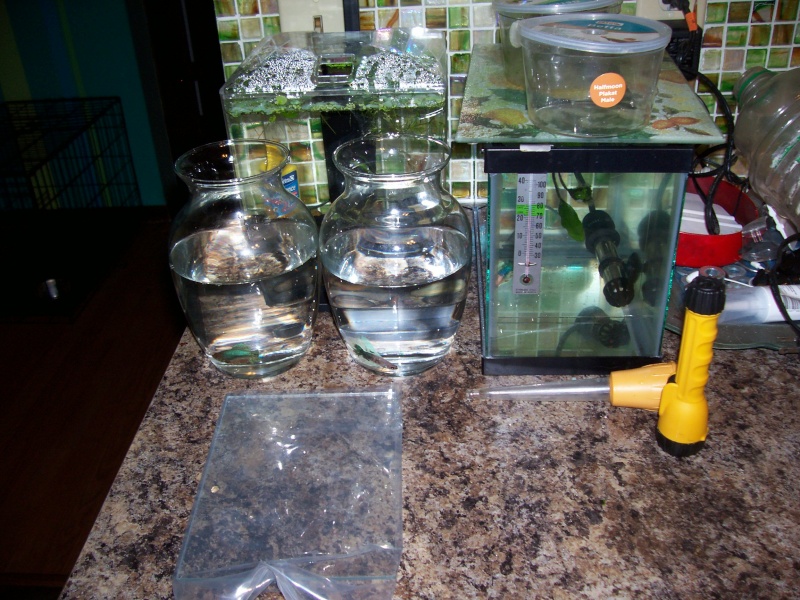 Some pics of my breeders 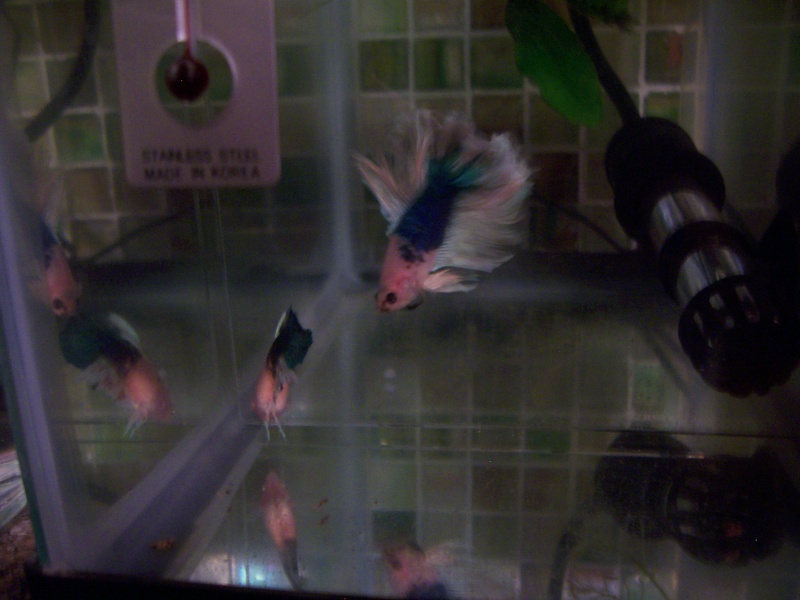 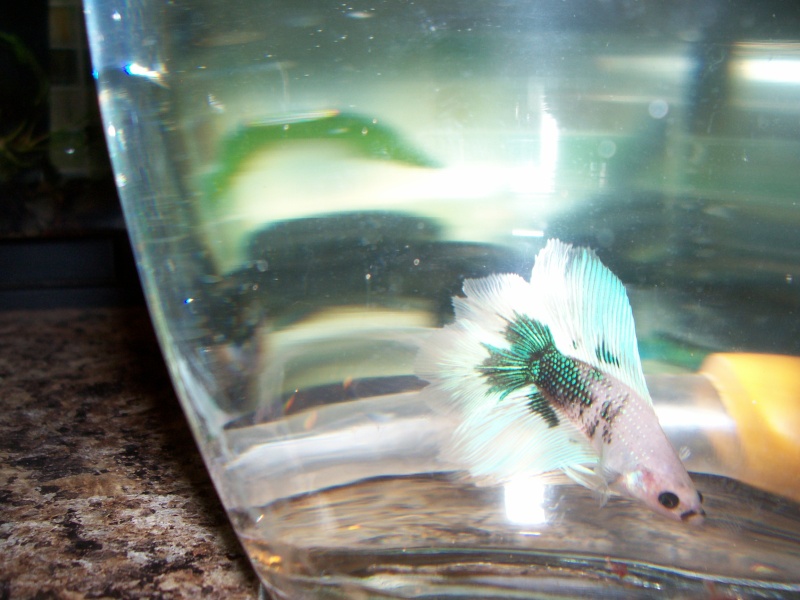 Gina are you going to breed some of your bettas in those vases?

No the vases are for holding potential breeders. I use a 2 gallon glass tank with heater,cover, and divider and a 10 gallon tank. My first spawn happened in the 10 gallon, the male is still guarding the fry and they are not free swimming yet. The male in the 2 gallon can't seem to get the job done so I'm going to switch him out this weekend.

Also whenever there is precipitation or weather front, seems to activate breeding activities with all my fish. Take advantage of tomorrows snow chance, do a large water change the night before and stuff them full of food. Introduce the fish Early Saturday morning.

Spawn number two perhaps. I switched males. I moved the proven male from the first batch into his own container to rest up. I was planning on letting him rest two weeks but he made a beautiful nest in his container so I set him up yesterday withe female and today there are eggs! If he pulls off this spawn then I'll retire him. He's gonna need a rest!

Spawn number one is a no go.

I checked the ten gallon today and only could find three fry. I think I'm going to scrap them and start over. Spawn number two is looking good, there are more fry than I thought and the fry are already eating brine. I think smaller tank and feeding as soon as they are in the nest with tails is the way to go.
I'm going to set up another pair tomorrow, this time in a shallow container with a small heater and plants. We'll see. 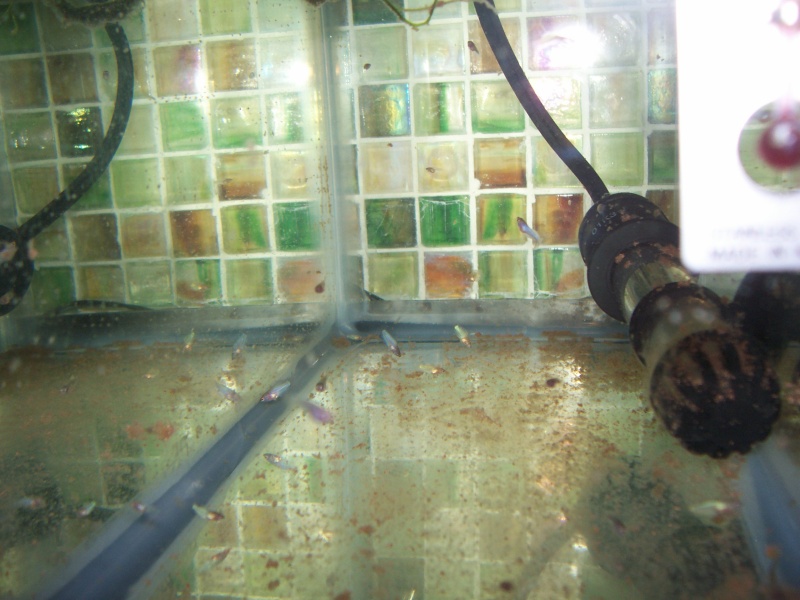 My first batch is now at the inch mark. I bred a marble turquoise halfmoon female and a blue? short finned double tail dragon scale male. I got 50% double tail, 50 % single tail and a surprise crowntail. I thought I would end up with all turquoise fish but I have all kinds of blue shades, a cambodian, several marbles, and some purples and reds. I'm not certain if any will have dragon scale and it's too soon to tell, that trait takes a long time to show...usually it does not express until the fish is an adult. Dragon scale type might be recessive, not sure. I have a few more spawns I'd like to get in this month but the fish are not cooperating. I'll post some pics soon.

How is everyone else doing?

It is time to give the person with the most spawns their prize.

Please list the number of spawns that you had luck with.

Mark- a big fat 0 but it was not because I did not try.

I have two spawns

Picture update of my oldest spawn. 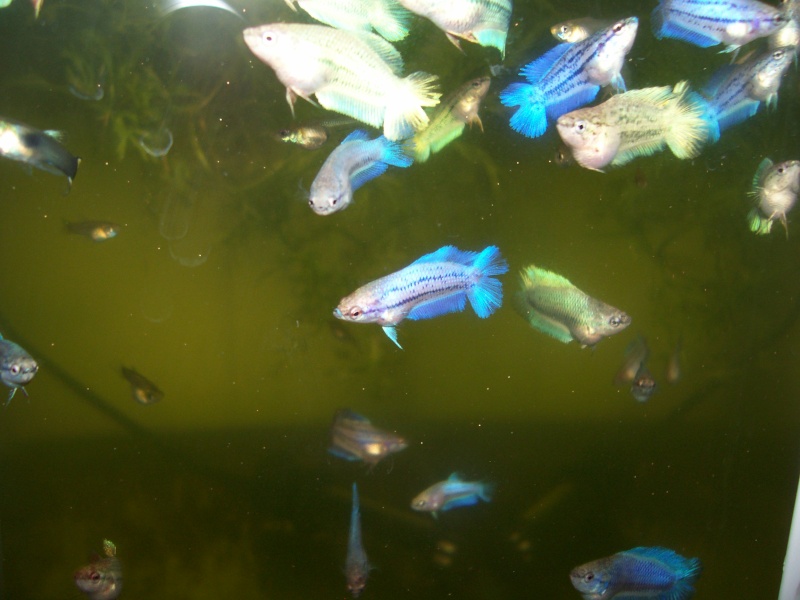 another pic of baby bettas 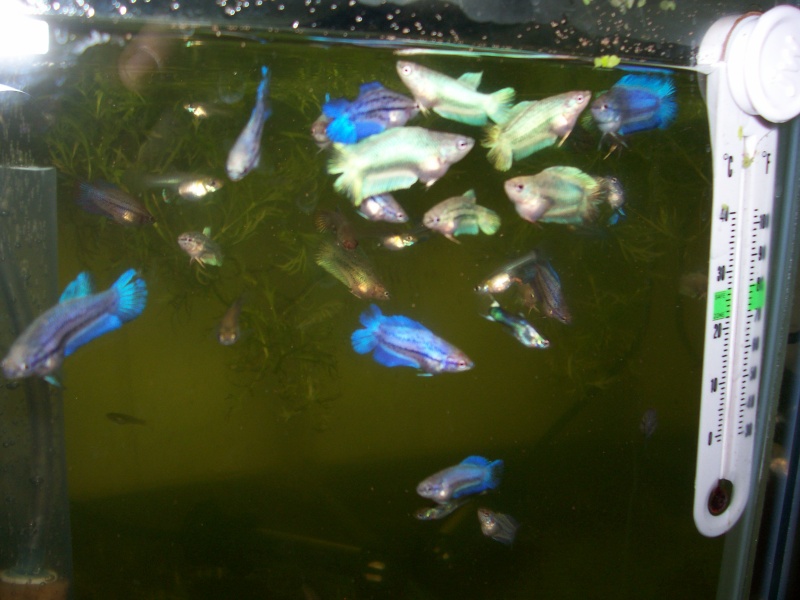 How many spawns have you had?

Thanks Randy, I've had three spawns but only two made it.

I'm working on two more, it's a little addicting.

they have such nice full bellies... what do you feed them? I notice a couple red eyes... is that just the flash, or are some of them really red eyed?
it does look like the colors are developing. will be interested to see what they look like in about 3 months!

Right now they are fed flake, bloodworms, and brine shrimp. Some do have red eyes because mom was a marble, she had one red eye and one normal eye. Here is a pic of Dad. 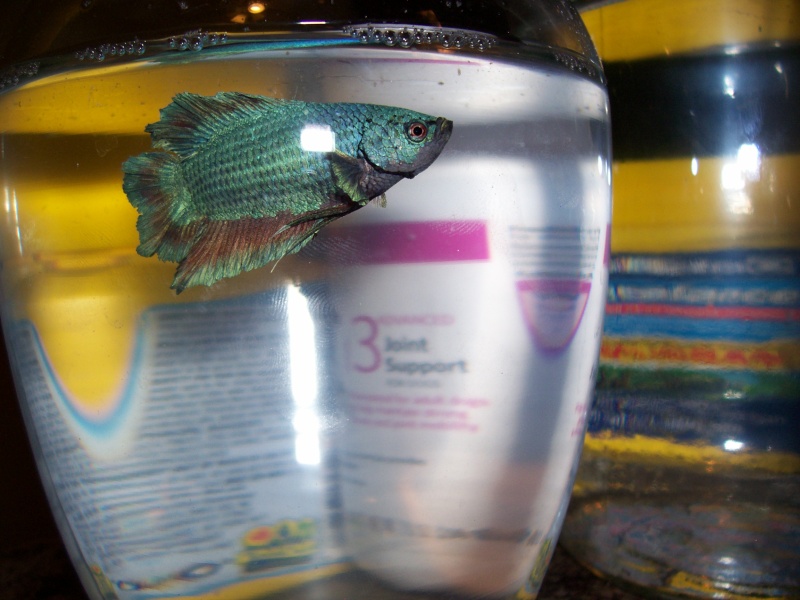 here is a pic of mom. 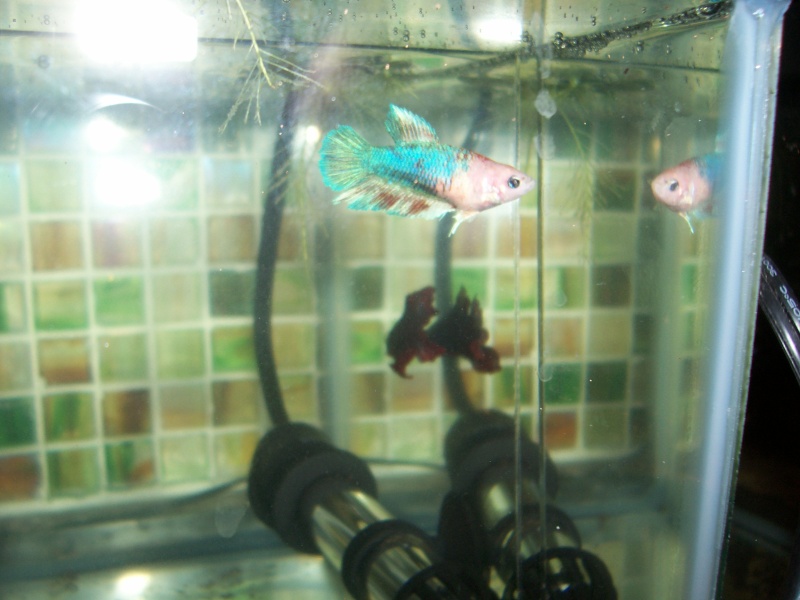 You're really right about the addictive nature of having betta spawns! I also got 2 spawns from my original pair, at least 3 weeks after you. After some of Mark's sad stories, I'd purchased several possible pair. For the second round of spawns 3 pair actually made it. Unfortunately for me, something happened with my water (I'm on a well system) and I lost 2 males, one of them the original male. I also have barely been able to save half of the first spawn up to now. One of the second set was a double tail male with a half moon female and I also saw the same half and half double tail numbers that Jena got. They're just coloring up good but both parents were dark turquoise color. The double tail ones have a whole different look to them, shorter, wide tails, different dorsal configuration. Hopefully they'll make it to the point some of you might want some???? Now I'm trying to decide the best new pairing since the first set is broken up.

so very cool! coming to grips with the fact that i'm gonna have to try this!

Gina, would you sell me 5 pairs of bettas? I can bring bags.