I ordered a really nice pair to breed from Texas! I called on Tuesday to ask when they would arrive they said we had a cold snap so we are waiting a week! (good thing cuz it gonna git real warm here in IL soon LOL)

Any way I started up another pair today! This is not a match pair like my new ones. So here we go! 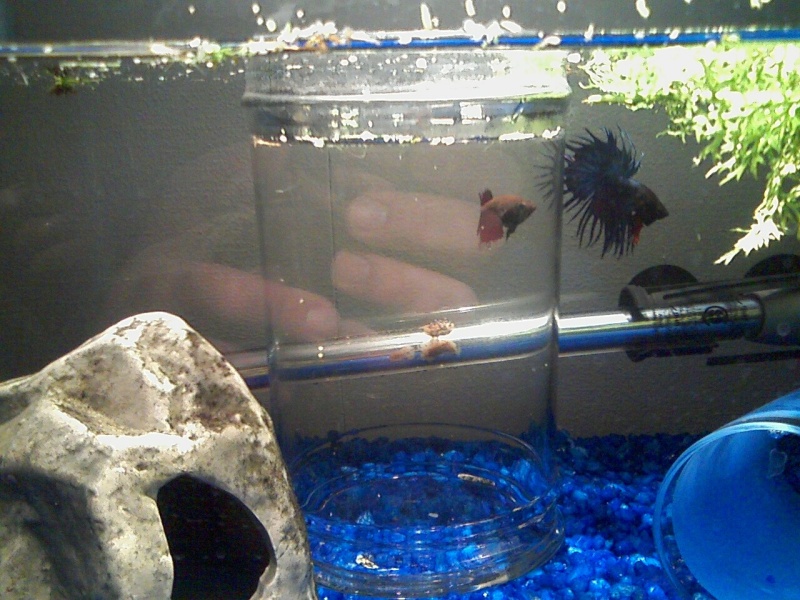 can you give me a name or e mail for the person you purchase yours from. I will try to get a pair shipped to me.

Well, I must say I do like the look of that crown tail. I think the fry may have a good chance at second place. I am working on purchasing the parents of the fist place fry right now.

All the luck to ya Mark!! Just got an e-mail that my Prize winning breeding pair should be here tomorrow!

I have the fish conditioned and put them together in a Rubbermaid tub![img] 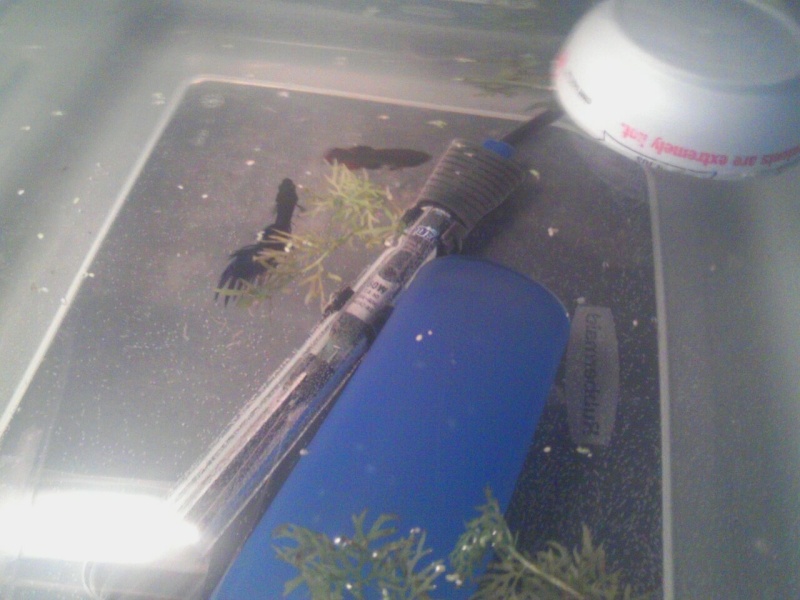 Could you post what the "address" is for where you got your bettas-- they look very good. Hope they do well for you.

So after talking with Sam yesterday I am going to try reverse psychology and see if that works!!!

There, let's hope that works!

Josh, we could tell you what you are doing wrong, but that would be aiding and comforting the enemy.

Did a big water change yesterday and my second pair finally got busy!!! Looks like about 80 eggs!!! 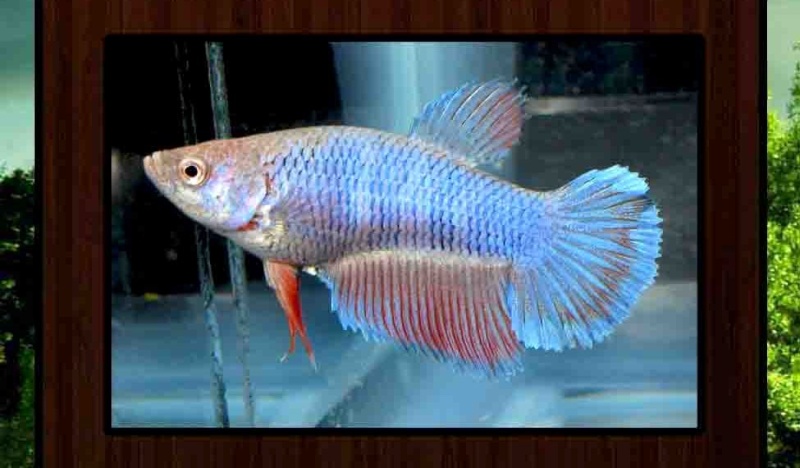 New Man in the House

Just released my new male and my first female!! He is a BOSS let me tell you had a nest in 10 Min!!

Male and Female are both red so looks like I am starting a red line!!!
Sorry phone camera sucks. 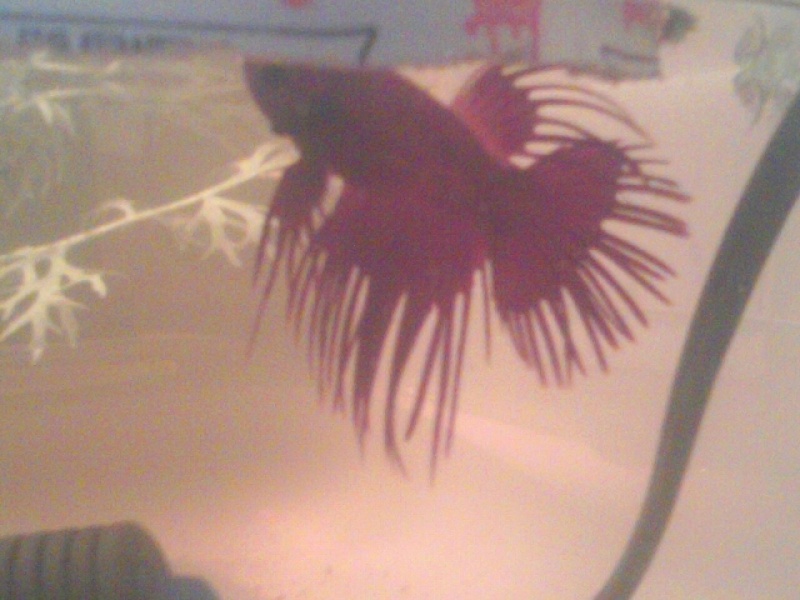 hope i'm still around when you guys all start having excess babies to find homes for... i'm already planning where i will put my betta bowls at my new house LOL.

As I type my half moon pair is spawning again!!!

I know I shouldn't count my betta's before they are eggs but look'n good!!!! 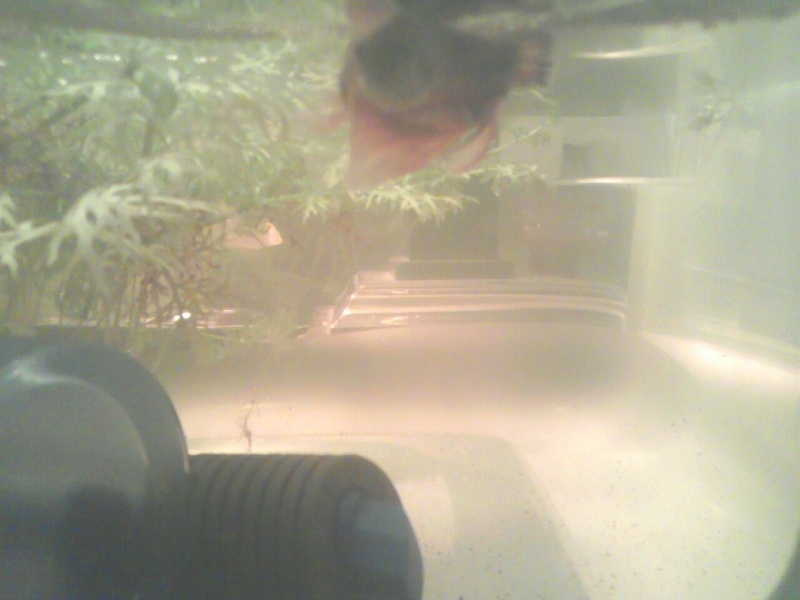 Doe anyone have betta fry? I wondered how they might be doing. So far I've had two spawns but so far no fry. Both sets- the female was the initiator and the males definitely took a while to get the idea. A third female came close to killing the male! No spawn however. Gotta let him heal up. And he's almost double the size of the other males. I don't figure I'm any kind of contest threat but would like to get some fry out of it.

I have about 8-13 fry out of the first batch!! Hoping I will have more out of their second spawn!!

I have 8-10 from first and 6 from my second spawn. I think the spawns were large but I had die off due to a couple of dumb errors on my part. Mistake one, fully filled ten gallon. I don't think all the spawn could reach the top to fill their labyrinth organ and the tank grew a thick layer of algae on top that I had to clear off. That also reduced the number of fry. The second spawn was in a 2 1/2 gallon and I decided this time to add some clean water (mistake two) and that is when a bunch vanished and I'm left with 6. I need to set up another spawn tank, I have a couple pairs ready to go. I should be getting higher spawn counts, like 70-80 fry. It's a little frustrating. The fry are quite difficult to rear and smaller than I remember.

I started having much better luck with the Corry and Angel fry when I used the microworms. They live in the water for a long time so the babies can eat when they are hungry without fouling the water.

Just checked the nest have about 100+ little tails hanging down!!!

Well everybody is free swimming!! I lost count at 60 something (little buggers move fast).

I'd go with Hakari First bites or Microworms for food.

yep! I am using micro worms and vinegar eels! I have seen the micro worms last up to 18 hrs in the tank!!

One of my spawns has babies just getting to the free-swimming stage. They're SO small for my old eyes! Can't tell if they're eating on the microworms since the tank is so steamed over and the water level is so low and the watersprite has gone crazy. They could be nice looking if the genetics match the parents. I've never photographed and/or put pictures on the web site. Maybe that could be something to share at a meeting some time.